The path to a PRism in 2015 started, for us, in August 2014. Nicole, Sarah and I attended the PRism Awards on June 18, 2015, and won a PRism for our work in media relations for the Casa Larga Purple Foot Festival.

Here’s how we got there:

Casa Larga’s annual Purple Foot Festival is a celebration for the start of harvest season. It is one of the winery’s family-friendly events and is a day full of activities, wine seminars, tastings, food, shopping and the big draw: grape stomping. Each year, the winery prepares for close to 1,500 visitors who hear about the festival through a mix of channels: email marketing, print and radio advertising, Facebook and Twitter posts, television and radio appearances and news coverage.

BTI works year round for Casa Larga Vineyards on all marketing, public relations, and social/digital media efforts. Again this year, we were charged with creating and executing a marketing plan to promote the Purple Foot Festival – specifically focused on securing media coverage and interviews for the winery leading up the event.

In the two weeks leading up to the event, two tragedies deeply affected the Rochester community. News reports were heavy and focused on a fallen officer and the deaths of two local philanthropists. For an event that never struggled for media attention, BTI was facing a week of serious news and the challenge of finding a way to bring attention to this lighthearted event.

Our team realized that the brightest part of the daily news was going to be the weather reports. There was no way news crews were going to have time to come out to the winery for promotional grape stomping and purple feet for the week before the festival as they had in past years. So instead, we brainstormed ways to bring the festival to them.

Purple gift bags tied with purple ribbon were delivered to the weather teams at the local news stations. Inside the bags were purple toe socks – a pair for each meteorologist – delivered with a grape pie. On the outside of the bag, a footprint outlined why they were receiving the bag and what they should do with the contents, as well as some information about the (well-known) festival.

Our work resulted in several extra mentions on local news stations and social media buzz from local news personalities. Three of the four local channels talked about the socks or pies and mentioned the festival on air in the days leading up to the event. A reporter even wore her socks on air and then posted a picture wearing the socks at the news desk with her coworker, a meteorologist whose toes didn’t quite fit. It was funny and lighthearted, and the Facebook and Instagram posts combined received 173 likes, 36 comments and 13 shares. A little over 3.6 million impressions around the festival were garnered from the media coverage. The festival in 2014 was a success, with no negative effects on attendance from recent events or cold morning weather. Approximately 1,200 people attended the 2014 festival. 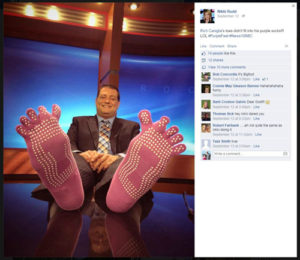 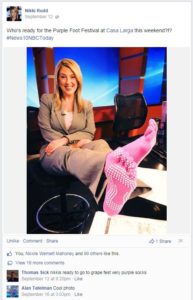 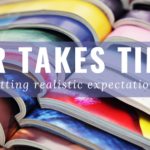 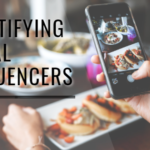