The tourism industry is keen on coining new words to capture the traveling public’s attention. EcoTourism, AgriTourism, VolunTourism, to name a few. The simple purpose – to focus attention on a particular area of interest. Appeal to the cause and the effect is your next vacation destination.

There’s a relatively new and totally opposite newly coined word in the industry, Overtourism. Actually, a thought process that’s been happening in the United Kingdom and Europe for more than twenty years but recently given the moniker to wrap the concept up into one, somewhat concise word.

Places like Amsterdam, Barcelona, Venice and further afar, Bali, Machu Picchu and well, you get it. Tourists flocking by the tens of thousands and the negative impact is being felt.

While those places and many others are strategizing ways to curb interest, other vacation destinations like the Finger Lakes region of New York State are dreaming up ways to attract visitors.

Here’s a concept that can do both. Seek out those places within a destination that fly below the radar. Those hidden gems that are slightly off the path, tucked under the radar, right around the corner if you weren’t so focused on the straight line to the next popular attraction and in the case of the 11 Finger Lakes, there are surprising little gems between those long figures.

Tucked in between Letchworth State Park – voted #1 State Park in 2015 in a USA Today Readers Poll and Watkins Glen State Park – one of the most visited state parks in the state, Stony Brook is a mini version of both parks with its own individual charm. Varying levels of waterfalls, hiking trails along both sides of its gorge and a swimming hole that nature carved out of the gorge.

Scenic and definitely under the radar in a region blessed with many and varying parks, the preserve is easy to hike, particularly along Six Mile Creek where you’ll find a hemlock gorge with cliffs, small waterfalls and little pools for dipping your toes. The preserve is part of the Finger Lakes Land Trust in its 30th year of stewardship for the lakes and lands of this region.

Up along the shore of Lake Ontario in a casual little community there’s a Key West inspired watering hole with summertime food and drink flare. A crazy-good Martini bar features over 180 varieties to choose from including their ‘Apple Pie Martini,’ notable because this lakeshore area is the 2nd largest apple producing region in New York State.

There’s a car in a tree. Look closer, there’s a plane in another tree. What, there’s a house and rope walkways and then more things and soon you know it’s a village – in the trees. Fun is the very best word to describe this kids wonderland. Joe the owner, along with his family invite drop in visits and are half the fun of the experience.

I’m going there. Telling you about a two-story outhouse and seriously suggesting you make the pilgrimage to see this 6 seat, made of solid brick, “lofty” roadside oddity built in 1869.

Belva Lockwood was a pioneer and visionary in women’s advocacy and the Inn, a lovingly restored historic home on the property where Belva lead a women’s seminary is the icing on the cake of being educated on the life of Belva. The first woman to run for president, in 1884! Not only that, she graduated from law school and was the first woman to argue before the US Supreme Court. The village of Owego is about to run, full steam ahead with a celebration of all things Belva. Beginning this month and going straight through 2020, the year that commemorates the 100th Anniversary of the ratification of the 19th Amendment, giving woman the right to vote. #BeLikeBelva

Ready to get off the beaten path? What hidden gems are under and around in your destination? 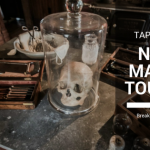